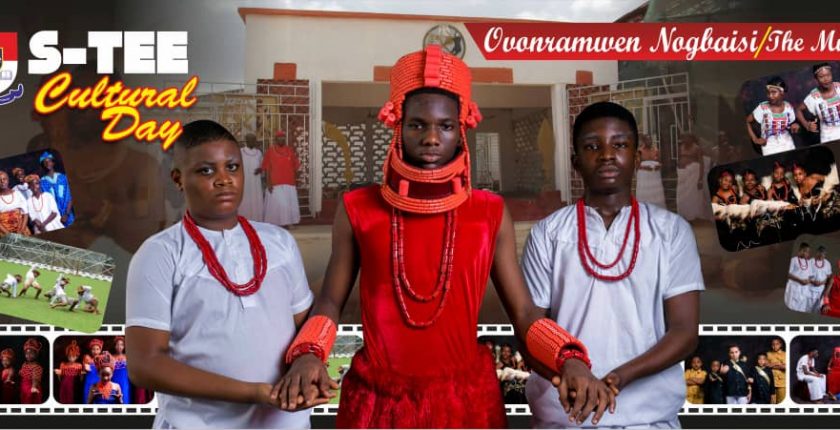 In our world today, every society is guided by unique values, customs and traditions. These unique characteristics generally form the culture of a group of people.

Culture, they say, is all of a group’s guiding values and the outward signs and symbols taken together as one big whole. In Africa, traditions and culture are given their deserved esteem. A typical African is proud of his rich cultural heritage.

Here at S-TEE School, we have set aside a biennial event – Cultural Day to celebrate our culture.

S-TEE being a multi-cultural and multinational institution, she will be celebrating her Cultural Day on Friday 12th April, 2019. The event will see staff, students, and parents put up displays of the rich cultural ethos of Africa.

Specifically, we are raising the bar higher this year. The 2019 Cultural Day will feature a musical play focused on the ever green cultural history of the old Benin Kingdom, Nigeria. The stage play “Ovonramwen Nogbaisi/the musical” is a narrative of Ola Rotimi’s book with the same title. This will be the school’s first ever attempt at a musical play, and it promises to be intriguing and breathtaking. With a cast of almost 200 students from our Primary and Secondary school, the event will feature a rich display of music, dance and drama at its best, all fused together.

The event will hold in the school’s Ceremonial Pavilion at 5th Avenue, H Close, Festac Town, Lagos from 10.00am.

S-TEE School is known for many things, among which are its rich curriculum content, high academic and moral standards and for its world-class events. The Cultural Day will not be an exception of the standards. The event aims to showcase the rich culture of the ancient Benin Kingdom in the reign of Oba Ovonramwen Nogbaisi, also called Overami, who was the King of the Benin Kingdom up till the British punitive expedition of 1897.

The Cultural Day will be a closed event to the general public. However, there will be live streaming of the entire event on social media through the school’s channels – Facebook, Twitter and Instagram. Clips will also be available on the school’s YouTube channel.

S-TEE School – raising a global generation of students with high moral and academic standards who will stand for excellence and integrity.